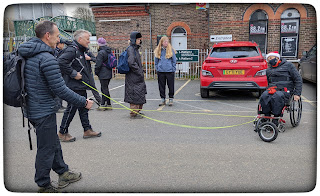 The Alfriston walk for 2021 fell on Saturday 18th and Sunday 19th December.  As can be seen in the first image, Ian arrived in his new Electric car!  The weather was grey but dry and the sun did try to come out occasionally.  There was a large turnout this year and some old faces returned but sadly, one face was missing.  Peter Scovell wasn't at Polegate Station to meet myself and catch the train to Falmer.  This was most unusual and none of us had had any contact from Peter about this.  It was only when we had arrived at the Deans Place Hotel, and Bobby had returned home that we heard the crushing news that Peter had been killed in a traffic accident the previous day!  It was impossible to take this info' in and we were all stunned and deeply saddened. Lycia was catching the train from Southease back to her car at Falmer. Lycia played a blinder by arranging for the Singing Kettle ladies to make-up scones with jam and cream, some cakes and flasks of tea so that we could refres
Post a Comment
Read more

Momodem
Married to Ruth, no kids but we have Mabel and Gladys as pets.